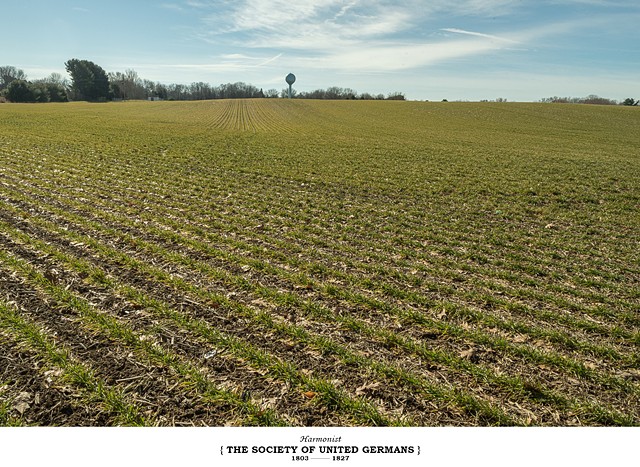 Affiliation Harmonist, Radical Pietism “I am a prophet, and I am called to be one.” – George Rapp, 1791

In 1791, George Rapp, a weaver from the German town of Iptingen in the southern Duchy of Württemberg, declared himself a prophet and that Christ’s second coming would be imminent. In direct opposition to the German Lutheran Church, Rapp practiced a form of Pietism. Pietism stressed authentic conversion from sin, a personal communication with God, and the pursuit of Christian perfection. By 1800, more than 20,000 German peasants had pledged faith in his prophecy.

George Rapp came to the United States by way of exile. In the late 18th century, Württemberg was under the control of Duke Karl Eugen, who lived a decadent lifestyle at the expense of his subjects. Turning to the church for comfort, many peasants instead were disaffected by the Lutheran clergy’s cold formality and intellectualism. Rapp and his followers confronted these conditions with what was considered blasphemy by the church. They claimed the local pastor was not a servant of God, the parishioners were hypocrites, and that communion was an idolatrous sacrifice. They also objected to baptism, confirmation, and communion as meaningless formalities. By the time Rapp’s followers removed their children from the Lutheran schools and refused military service, both the German church and the state had had enough.

George Rapp saw signs of the end times in the Napoleonic Wars. He also viewed the Harmony Society as “the woman clothed with the sun who fled into the wilderness, where she hath a place prepared of God,” from the Book of Revelations. North America was this wilderness, beyond the corrupt churches of Europe that had imprisoned him and oppressed his followers. George Rapp and The Harmony Society immigrated to Pennsylvania in 1803 where they began to practice communal living for mutual assistance in the style of first century Christians. Their new settlement in America was called Harmony, Pennsylvania.

A group of Harmonists did not settle with George Rapp in Pennsylvania but instead settled at Bull Creek in Columbiana County, Ohio. Many purchased land plots with the idea that the other Harmonists would soon follow. On January 14, 1805, Rapp initiated a “final reckoning” in which all of the landowners – in Pennsylvania and Ohio – had their debits and credits balanced and their property turned over to “George Rapp and Associates.” Rapp’s idea of living in an imitation of primitive Christians was not readily accepted in Pennsylvania, and required much preaching and praying to gain consensus and the necessary signatures. The Harmonists in Ohio were even less convinced. Many in Bull Creek had already placed money in Rapp’s treasury before it became a communal village. They not only refused the “final reckoning,” but many also sued to retrieve their investments.

Reason for Demise: The group of Harmonists at Bull Creek continued to follow the ideas of George Rapp and Pietism, but refused the transformation that had occurred in America such as communal living and the practice of celibacy. They continued on their individual farms until 1827 when Peter Kauffmann and other Rapp dissidents formed the Society of United Germans at Teutonia.