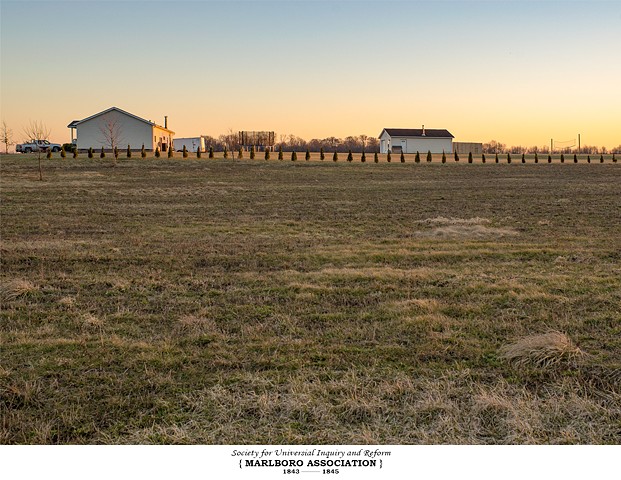 Size: 50 residents “The Marlborough community seems, as I think of it, to have had its existence so entirely in the dreams of human advancement and the generous wish to promote it, and also in ignorance of all but the better part of human nature, that it is hard to speak of it as a bona fide portion of our plodding work-a-day world.” – Esther Ann Lukens

The Marlborough Association was primarily comprised of Hicksite Quakers who decided that living by example could be a more effective means of moving people away from a competitive society than lectures or agents. Yet moving past theory and discussion into a life of non-resistant communitarianism brought a particular set of concerns. How could they have order without means of coercion or punishment? How could they survive without engaging in commerce? How could they welcome all without being victimized by the lazy? How could they commit to a religious vision without a shared religious commitment?

Edward Brooke of Stark County, Ohio offered his farm on which the group could live, while his brother, Dr. Abraham Brooke, offered his land as collateral. The Marlborough Association built two large houses holding three families each and two log cabins. By 1845, they had built two more large houses giving individual families more privacy. The members followed a plain vegetarian diet, attempted to extricate themselves from Capitalism, and were active abolitionists. The group elected no officers, and new members were not required to make a financial contribution.

Reason for Demise: The Association began to fall apart when Joseph Lukens, aged 22 and a central figure to the group, died of a spinal cord injury. The core members attempted to reduce the group’s growing tension by writing a constitution, but other founders such as Abraham Brooke saw it as a document of tyranny. Ultimately, it was financial issues that proved their downfall. As their community continued to grow, the Marlborough Association was forced to purchase more land from a neighbor who was not sympathetic to their cause. They incurred a debt, which required more commercial interaction with the outside world. Some members were willing to make a compromise for the sustainability of the community, but others saw it as a betrayal of their original principles.

This difference of opinion epitomized the conflict between Edward and Abraham Brooke. Edward, who held the mortgage on the land, became convinced that the community needed a more secure financial future. He proposed they control admission to the Association, favoring those who could contribute money or demonstrate they were highly committed to the community’s principles. To Abraham, an entry fee went against the whole purpose of the community, which in his mind, was to break free from commerce. As a doctor he practiced for free, and when he wanted or needed something, he just asked for it.

At the time of the brothers’ conflict, the future of the community rested on three families who had the ability to contribute funds. Two of the families moved away from Marlborough after a year and before giving their promised contribution. The third family was unable to sell their farm. Edward realized the community was headed towards bankruptcy and decided to pull out, taking a majority of the land with him. According to community member Esther Ann Lukens, “The experiment failed at the time it did through lack of faith in those who had the funds, and lack of funds in those who had the faith.”