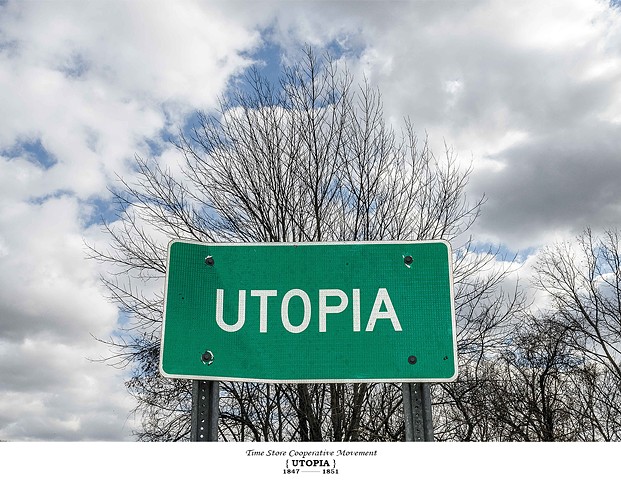 Location: Clermont County, on the banks of the Ohio River in Utopia, Ohio

“I built a brick cottage one and a half stories high, and all the money I paid out was $9.81- all the rest was effected by exchanging labor for labor.” - E.G. Cubberly writing in 1872 about his experience in Warren’s Utopia community Josiah Warren founded Utopia strongly on the ideals of individual responsibility and mutual cooperation. Rather than having a government or wealthy capitalists on whom to rely, participants relied on themselves and each other through the even exchange of labor. Participants would offer their labor in the form of a labor note. Items were bought and sold with time-based currency where an hour of work could buy an hour of goods or services. For example, three hours of carpenter’s work could be considered equivalent to 3-12 pounds of corn. Warren wanted to prove that if given the means, individuals could provide for themselves and live comfortable lives.

According to founder Josiah Warren in the Peaceful Revolutionist in 1845:

“Throughout the whole of our operations at this village, everything has been conducted so nearly on the Individual basis, that not one meeting for legislation has taken place. No organization, no delegate power, no constitutions, no laws or bye-laws, rules or regulations, but such as each individual makes for himself and his own business; no officers, no priests no prophets have been resorted to; nothing of this kind has been in demand. We have had a few meetings, but they were for friendly conversation, for music, dancing or some other social and pleasant pastime. Not even a single lecture upon the principles upon which were acting, has been given on the premises! It was not necessary; for as a lady remarked, ‘the subject once stated is understood, there is nothing left to talk about; all is action after that.” Reason for Demise: Due to the high price of surrounding land, the settlers were not able to expand. Most settlers moved from Utopia to Minnesota where the land was cheaper.