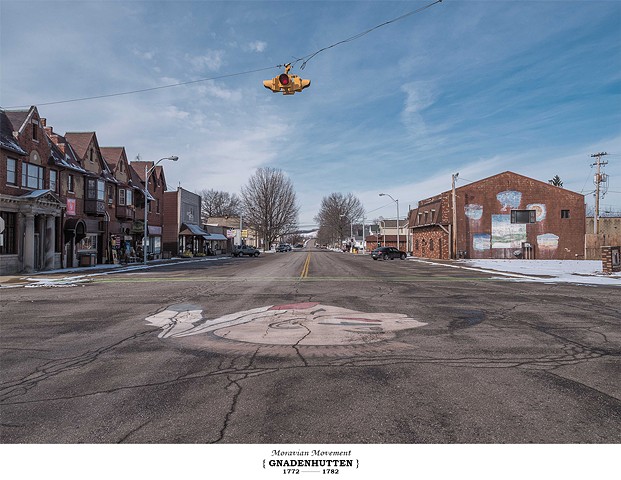 "You recall the time when the Jesus Indians of the Delawares lived near the Americans, and had confidence in their promises of friendship, and thought they were secure, yet the Americans murdered all the men, women, and children, even as they prayed to Jesus?" – Speech by Tecumseh to President William Henry Harrison, August 11, 1810

Gnadenhutten, or “Tents of Grace” in German, was founded by Reverend David Zeisberger as a mission for Lenape Native Americans. The community lived communally and practiced Pacifism. During the American Revolution, the British feared the Lenape would aid the Revolutionaries and evicted them to “Captive Town” in Northern Ohio. Stripped of their farmland and possessions, the Lenape were not equipped for the winter of 1780-81, and many died of starvation and disease. While continuing to hold Reverend Zeisberger, the British allowed 150 Lenape to return to Gnadenhutten in the later winter to retrieve their possessions and to harvest any remaining produce.

Reason for Demise: Called the “Gnadenhutten Massacre”, Pennsylvania militiamen led by Colonel David Williamson, mistook the returning (and peaceful) Lenape for a tribe that recently raided Pennsylvanian settlers. Tricked into giving up their weapons, 96 Lenape spent the night of March 5, 1782 in song and prayer awaiting their deaths. They were brutally slaughtered in the morning, and their 60-cabin town was burnt to the ground. Only two boys escaped. The Moravians never rebuilt after the massacre.